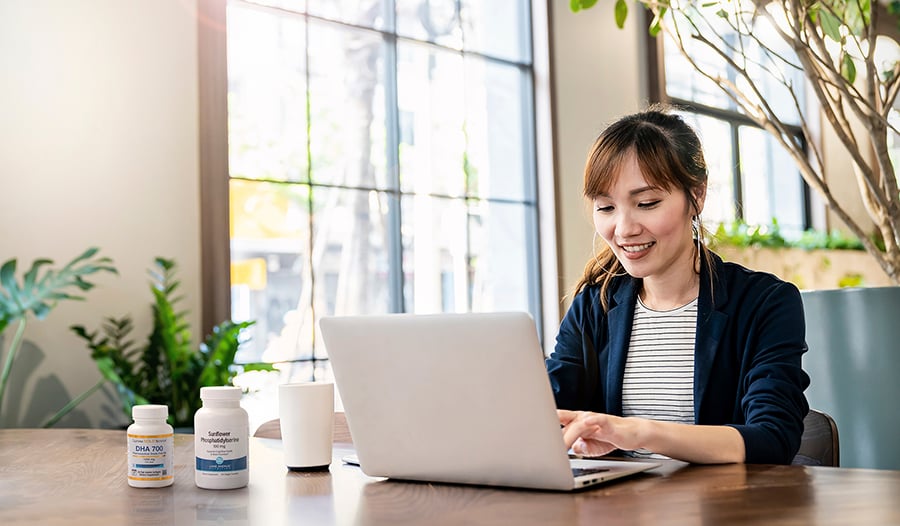 Most of us focus on diet and eating right when it comes to getting healthy and staying healthy. Maybe we take care of our heart health through exercise and gut health through eating nutritious foods, but how often do we consider brain health?

As you age, you may need more brain support. Aging can affect the brain by increasing learning and reaction times, decreasing brain cell connections, and leading to poorer memory.

As a biological lipid, phosphatidylcholine is a crucial component of our cells, making up a large part of our cell membranes. It is formed in the body from choline obtained from the diet.

Choline is a crucial nutrient that acts as a building block for the neurotransmitter acetylcholine, which plays a role in memory, learning, and phosphatidylcholine formation. Choline can be found in certain foods, including egg yolks, soybeans, chicken, and beef.

Studies suggest that phosphatidylcholine may be involved in improving memory and cognitive performance. For example, one study found that lower levels of phosphatidylcholine in the bloodstream were associated with poorer memory recall and decreased brain function in older individuals.

Another study suggested that higher choline in the diet, and therefore more phosphatidylcholine synthesis in the body, led to better performances on verbal and visual memory tasks in individuals with Alzheimer’s disease.

Further animal studies on rats with a neurodegenerative disease similar to Alzheimer’s suggest that phosphatidylcholine in combination with eicosapentaenoic acid (EPA) and DHA omega-3 fatty acids may help to reduce brain inflammation and increase cognition.

More research suggests that the combination of phosphatidylcholine with another lipid, phosphatidylserine, may act as an antioxidant for the brain while protecting brain cells from overactivation of the immune system, which may lead to diseases like Alzheimer’s.

Another study showed that phosphatidylserine might improve memory while also preventing feelings of sadness during colder months (the “winter blues”) in older patients.

Thiamine, also known as vitamin B1, is a water-soluble vitamin and an essential nutrient that must be obtained from the diet or through supplementation. Foods high in thiamine include green peas, beans and lentils, sunflower seeds, yogurt, and brown rice.

Thiamine is important for the breakdown and metabolism of carbohydrates and as a helper for mitochondrial enzymes (the powerhouse energy producers of the body) but it also has a well-established link to neurological health. For example, thiamine deficiency has been determined to cause certain neurological diseases, such as beriberi, symptoms of which include difficulty with walking, loss of sensation in the extremities, and difficulties with language and speech.

Research also links low thiamine intake with other cognitive complaints, such as poor memory and nerve cell damage. Furthermore, research suggests that the brain may be especially vulnerable to thiamine deficiency due to its reliance on energy production by mitochondria.

Studies suggest that thiamine may act as an antioxidant and an anti-inflammatory agent in the brain to help prevent and improve memory and cognition. This may be due to the ability of thiamine to improve glucose metabolism in the brain because the brain uses glucose as a primary source of fuel.

For example, one study divided participants with mild cognitive decline and mild Alzheimers disease into two groups: one who received benfotiamine and one who received a placebo. Benfotiamine is a synthetic fat-soluble form of thiamine or vitamin B1 that is more bioavailable or readily absorbed in the body. The group that received benfotiamine had less cognitive decline and better signs of glucose metabolism in the brain than the placebo group.

Lutein is a carotenoid. Carotenoids are responsible for the colors ranging from red and orange to yellow found in food. The yellow hue of lutein is naturally found in spinach, kale, chicory, bell peppers, and other foods. Lutein is what gives egg yolks their signature yellowish color.

Lutein is often coupled with zeaxanthin because they both may have benefits for eye health. Lutein is sometimes referred to as the eye vitamin or eye pigment because of its potential health benefits for the eyes, including the ability to possibly improve and even prevent diseases such as age-related macular degeneration.

While lutein may have great benefits for the eyes, research suggests that it may be beneficial for memory and cognitive function as well. For example, studies show that lutein supplementation in adults may lead to improved brain oxygen levels and an increase in memory retention, faster reaction times, and improved cognitive function.

Research also indicates that a higher lutein intake may be associated with better word recall and memory in older adults. This may be due to lutein’s anti-oxidant and anti-inflammatory effects on brain tissue. Given that lutein is the most prevalent carotenoid in the brain, this may contribute to the anti-aging properties of lutein.

Animal studies suggest that lutein may help to improve neuroplasticity, the ability of the brain to reform and reorganize connections and grow based on learning and experiences, while also preventing brain cell degeneration.

When it comes to brain health, DHA is often the first nutrient to come to mind. DHA is an omega-3 fatty acid naturally found in algae and fatty fish, including salmon, herring, and tuna. DHA is the principal fatty acid in the frontal cortex, the area of the brain responsible for higher executive function and expressive language.

Studies suggest that increased DHA can lead to better cognitive function and memory. For example, one study found that individuals who supplemented with EPA and DHA had improved cognition and better cognitive outcomes than placebo.

Furthermore, research suggests that a reduced level of DHA intake may lead to cognitive decline in aging. This is thought to be due to how DHA may contribute to increased oxygenation and perfusion of the brain while decreasing brain inflammation. Animal studies even suggest that lower levels of DHA intake or impairment of DHA metabolism may lead to less neuroplasticity and an increase in brain inflammation.

Research also suggests that supplementing with DHA may help the brain to perform tasks easier. For example, one study found that young adults who supplemented with DHA were able to have better cognitive outcomes with less brain activity.

When it comes to supporting memory and cognition, try giving your brain a boost with phosphatidylcholine, phosphatidylserine, thiamine, lutein, and DHA.

Dr. Candace Mathers is a licensed naturopathic doctor and owner of Life Blossom Wellness, a telehealth wellness company offering premium personalized functional medicine and holistic services in the suburbs of Chicago, IL. While she works with many different diseases and disorders, she has a special focus on mood disorders and optimizing the health of individuals with Down syndrome. Visit lifeblossomwellness.com to learn more.

Previous Article
Coconut Oil vs. MCT Oil: What's the Difference? Which Has More Health Benefits?
Next Article
Everything You Need to Know About Collagen Peptides

169,870 Views
Quality nutrition is key to supporting our brain health as we age. If you are showing signs of decreased brainpower or loss of memory consider these nutrients.

31,222 Views
Improve the health of the body and brain by fasting, exercising, following a healthy diet, and supplementing with turmeric, bacopa, and more.

48,997 Views
How to protect the brain against memory loss and Alzheimer’s disease